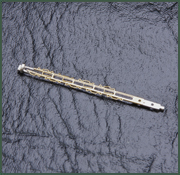 To cast the smallest part ever produced by the manufacturer of a pogo block assembly used in high performance test equipment for microchips. The miniature part weighed less than one-tenth of an ounce (.00090 pounds) had the thinnest walls we had ever cast, and one of the smallest (.023) cored hole. The part had been previously been CNC machined from Aluminum 6061-T6, causing several problems:

The difficulty in developing a cost-effective solution was illustrated by the fact that the customer received 20 "NO BIDS" on the project. DeCardy worked with the client’s patented mechanical design to cast the part with Zamak 3 alloy. Die casting the part provided several production and performance advantages:

Based on DeCardy’s ability to push the envelope for a light, thin zinc die casting, the pogo block assembly was an award winner at NADCA’s 22nd International Die Casting Competition. To learn more about this project, please contact us directly.