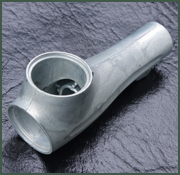 To develop a solution for a spotlight head housing for police, emergency, military and commercial vehicles. Zinc was identified as the appropriate material because of its durability and that it can be chrome plated. However, there had been several previous casting method problems with the .39 pound part, including:

DeCardy determined the Zinc 3 alloy being used to be acceptable, however, a change in the casting method from the previous low tech, conventional machine to a high-pressure French DAW 50S cell was required. Additional changes included:

The casting changes that were approved and implemented produced a more aesthetically pleasing and better performing housing design, provided production improvements and reduced costs. This included securing the "A" pillar tubing with higher accuracy and using the O-ring to prevent shorting out the electrical system. The number of pre-plating buffing operations was reduced by 60%, with an overall cost savings of 36%.

The improvements resulted in the casting being named an award winner at NADCA’s 23rd International Die Casting Competition. To learn more about this project, please contact us directly.